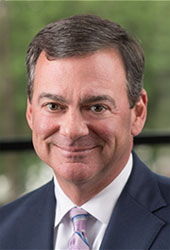 Seefried co-founded Headwaters MB in September 2001 with the thought of marrying world-class financial and capital market skills with the fanatical pursuit of great client service experiences. He led Headwaters as its CEO until the merger with Capstone in late 2017.

He started his career in investment banking with Bankers Trust Corporation in New York. Following Stanford Business School, he returned to Wall Street with Credit Suisse (then named The First Boston Corporation), where he began in the M&A group. After working in both capital markets and sales, Seefried was named Co-Head of Leveraged Finance. During that time with Leveraged Finance, his department managed 173 deals totaling over $39 billion.

Seefried was then named Chief Operating Officer of the 350-person Global Credit Group in 1998. He also served on the Investment Banking Committee reviewing all capital raising engagement opportunities in the US.

He left Credit Suisse in 2000 and spent a year as Chief Financial Officer of Open Access Broadband Services before launching Headwaters in the fall of 2001.

Seefried is very active across various deal teams and spends significant time on strategic planning for Capstone Headwaters and for clients of the firm. He has served on the boards of Aurora Organic Dairy, Classic Brands, and Mergers Alliance.